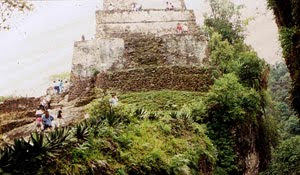 In 1992, Camille, Elissa and I had a great trip to south-central Mexico. One day, we went to Tepoztlan, an ancient religious center, where pilgrims came from as far as Guatemala to worship the god of pulque, the pre-Colombian alcoholic beverage made from maguey.
To get to the pyramid, we had to hike about two miles up a volcano. It was a beautiful hike. There were a lot of pilgrims out that day, and there were hikers coming and going. At one point, the trail involved climbing a 20-foot iron ladder.

It was a bottleneck that called out for traffic control, since people couldn't be going up and down at the same time. But it was a seamless, anarchistic kind of traffic control. No one directed it. No one said, now you stop, now you go. The crowd controlled itself effortlessy. Some people went up. Then they stopped and some people came down. That was it.

It was anarchy. There was no government, no schedule, no director...and no effort. It was obvious that a certain amount of organization was needed, because otherwise traffic couldn't flow through the bottleneck, but the organization arose spontaneously from the good nature and common interest of the hikers.

Sometimes, say driving on the freeway, I think about that, and I wonder at the beauty, the coordination, the relative safety of what we are doing. I guess rules and regulations are necessary for smooth, safe traffic flow. But I think the primary enabler is the good will and common purpose of the drivers. The Tepoztlan principle.
See pix at http://www.facebook.com/album.php?aid=112007&id=649538674&l=2b8156d9cd
Posted by Peter Rashkin at 8:03 PM 1 comment:

This will supplement my website (1400ml.com) and facebook pages.
Posted by Peter Rashkin at 8:30 PM No comments: