Language, reading and computers on the road

I was worried, flying into Mexico and making my way to Elissa’s on my own, that my poor Spanish would be inadequate, but I was fine. I was even able to have a conversation with the guy who helped me with my luggage, about our grandchildren (and his great-grandchildren) and with the cab driver about the nice weather and clear skies in Mexico City.

I’d say my Spanish, while crude, is better than I thought it was. I can make myself understood, and when someone is talking to me I can usually understand (I think!) Still, peor es nada...worse is nothing! And when people are talking among themselves, I really can’t follow the conversation. This can be disconcerting, and tiring, particularly when I really want to understand what is being said. Fortunately I have Xochi to help me.

It’s not an entirely negative experience. Without comprehension, the musical quality of speech seems more pronounced. Especially the fluid, lilting, unselfconscious sounds of the children can be really beautiful. And I just love the calls wafting up from the street...I’ll have to try to set them down or even record some: “Tamales, mole, ranchera...” Beautiful.

This seems curious: Elissa and Xochi speak English and Spanish to each other, mixed up, seemingly at random. Elissa says she doesn't think about it or in any way decide which language to use. I guess she thinks some things in one language and some in the other. I think for X, it's mostly Spanish unless she is talking to me or one of her other Norte Americano relatives.

READING IS ONE of the pleasures of travel. At home, with my endless NPR, computer, and TV inputs, I just can’t seem to make as much time for books as I would like. This trip, I’ve already read two and part of a third, and they were all excellent.

First, I read A MADMAN DREAMS OF TURING MACHINES by Janna Levin, a physicist who has written a novel about two prominent 20th century mathematicians, Kurt Gödel and Alan Turing. Gödel, a highly disturbed man throughout his life, who eventually starved himself to death because he didn’t trust the food, proved – against established wisdom - that mathematics was incomplete, and that even in arithmetic, not everything could be proved. It was revolutionary, like the more famous Heisenberg Uncertainty Principle that showed that on the quantum level at least it is just not possible to know everything. Turing basically invented the computer to help decode intercepted German communications in WWII and was instrumental in the Allied war effort. Later, convicted of homosexual activity and forced to undergo chemical castration, he committed suicide by eating a cyanide-laced apple. Excellent book.

Next I read CROSSING by Jan Yoors. I bought his classic, THE GYPSIES, as a present for Elissa. Yoors is not, in my opinion, a great writer, but what he writes about is fascinating. As a 12-year-old in Belgium in the 30s, he ran off and joined a band of traveling Gypsies. His Bohemian parents did not interfere. He would come back to visit every year, and spend a little time in school, but most of his adolescence was spent with his adopted family. He writes about them with insight and compassion. CROSSING is the story of his experiences in WWII. As the specter of Nazi domination spread through Europe, Yoors left his Gypsy family, rejecting an arranged marriage that would have sealed his membership in the community, drawn by the wider world of which he was still a part. He tried to get to Britain to join the war, but before he could get there he was contacted and asked to recruit Gypsies to work with the Resistance. It’s a harrowing and compelling story.

Another present for Elissa, which I carried for her mother (the mail is slow and unreliable), was Patti Smith’s JUST KIDS. Unlike Yoors, who is adequate, Smith is a terrific writer, and her account of her life with Robert Mapplethorpe as young artists in New York in the 60s is compelling. I read a third of it before Elissa took it, but she is almost done and I’m sure I’ll finish it before I leave.

Next, Darwin’s ORIGIN OF SPECIES, which I’ve been meaning to read for some time. And for the trip home, I’m saving INSPECTOR CADAVER, a 1944 mystery by George Simenon.

THE COMPUTER THING is more interesting than I thought it would be. Elissa’s internet connection has been down since I got here. She keeps calling them and they keep not fixing it. Yesterday the person she was talking to said that it looked to her it was working and then (probably inadvertently) hung up. So to get on the internet I’ve been going to her office, or downstairs to the computer place where you can use their internet-connected computers by the hour (very reasonable). Each computer is interesting in its own way. E’s MS Office is mostly Spanish, although spell check and certain other functions seem to be in English. I’m a keyboard shortcut guy, especially Ctrl S (save) and Ctrl A (select all), but those don’t work. Instead, you have to use Ctrl G (guardia) and Ctrl E (seleccionar todo). Not a problem; hard to get used to.

The other computers are totally in Spanish, and using the Spanish-English dictionary is not always enough to figure out how to do normal things. And the keyboards, which are designed to accommodate the accented characters of the Spanish alphabet, really take some getting used to. A lot of the punctuation marks are in different places. Yesterday at the internet place I had to ask the guy how to access my flash drive to upload some pix to Facebook (I think it was under Equipo). In general, finding normal functions is a challenge.

I can only imagine what it would be like if I were in China!

And this is weird...editing this blogpost, the computer thinks I should be writing in Spanish on some paragraphs only...every word is underlined as if it's misspelled. Other paragraphs it thinks are fine.
Posted by Peter Rashkin at 10:48 PM No comments:

Expatriate for a Day 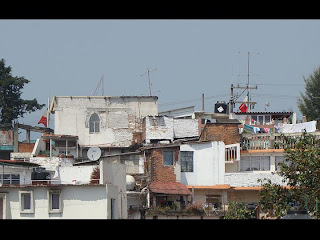 Home alone in Elissa’s third-floor shotgun apartment on Calle Moctezuma, a narrow two-block cobblestone street named, E says, not for the Aztec ruler but for the beer that was made here and is still made in Orizaba. I didn’t go with Jose to take Xochi to school, or walk with Elissa to her office as I have the past three days. Just staying home alone, working on my pix, thinking about what I’ll write for my blog, and indulging for a few hours in one of my favorite life-long fantasies: The expatriate writer in a foreign city, bathed in foreign sights and sounds, free of habitual assumptions, free of daily interests, commitments and concerns, free of NPR, free of the familiar.

I pace the hall from the kitchen to the open door and the tiny balcony. Across the street, a woman hangs her wash on the roof. Behind her house, a block over, is a small hill covered with dense housing. Concrete, brick and adobe. Balconies. Water tanks. Laundry hung to dry on the rooves. And at the top, partially obscured by a tile roof, a Mexican flag waves in the breeze, and I remember when I landed in Mexico City a few days ago, the title of a song came to mind, “Mexico Linda y ...” only I couldn’t remember the last word. I asked the woman sitting next to me. “Mexico Linda y Querido.” She smiled, glanced out the window, and clasped her hands over her heart. Mexico, beautiful and loved. 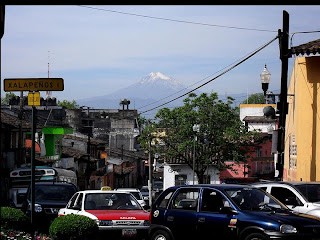 The walk to Elissa’s office is down one of the main city streets, Xalapenos Illustres. Narrow, busy with vehicles and pedestrians, small shops, offices and apartments butted up against each other, two or three floors high. It leads past the old church, a cultural center, a rec center and in half a mile or so gets to the colonial state capital, across the street from the colonial cathedral, but Elissa cuts up and over to avoid the center and has another half mile or so down a more narrow but still busy street, Juarez. Between the architecture, the people, the businesses, the occasional dog and some crazy signs (one had the E with the slash for no parking, and underneath it said “se ponchan llantas” - tires will be punctured), there is something interesting every few steps.

The other day, looking south at an intersection, there was a great view of Pico Orizaba, a beautiful classic snow-covered volcano.

THE MARKET is just a few blocks away, behind a large colonial church. I walked over Tuesday for lunch, and today, market day, I went back for some fruit and cheese. I have a serious problem with farmers’ markets at home, and it was the same here...I buy too much! And pesos are so much easier to spend then dollars! Soon my two shopping bags were full, and I had to lug them home. The cheese is fantastic...a kind of string cheese. I ordered a kilo (momentarily forgetting that a kilo is more than two pounds. The vendor unwound it from a big ball. And I brought some strange red flowers I’d never seen before, called here gasparitos, although apparently they are known by other names in other parts. Gathered, not farmed. The vendor explained how you fry them with eggs. Elissa was familiar with them and cooked them up this morning. Muy bien sabrosa! 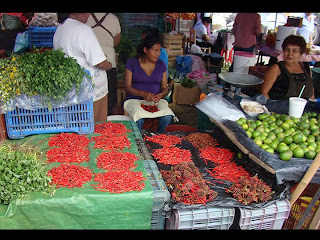 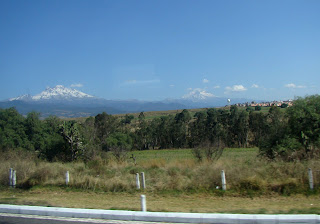 Sunday, Mar. 21 - Plane from LA to Phoenix. Another to Mexico City. Taxi to Tapo station. Bus to Xalapa. All connections smooth as silk. No rushing and no waiting. The bus is really incredible, with plush, roomy seats, airplane-style bathroom, no stops. Four and a half hours on a smooth, modern toll road, for just $24. You go through a security check, then as you board you are given a complimentary water or soda, and the makings for tea or coffee, hot water and cups available at the back of the bus. Movies and music, which I didn’t take advantage of.

We head east. To the south, great view of Iztaccihuatl and Popocatépetl, the magnificent snow-covered volcanoes, Popo recently active, part of the ring of mountains surrounding the Valley of Mexico. Between them, the Paseo de Cortes, where the conquistadors marched on their way to conquer Mexico in 1519.

Huge auto factories – VW, Mercedes Benz and others – surrounded by half-finished, half-decayed concrete towns where the worker live. Occasionally, far off in the midst of this concrete mishmash, the unmistakable towers of a colonial era church. Then miles of irrigated fields that could be in California’s San Joaquin Valley, except for the occasional horse-drawn wagons and (I think) plows. Some smaller farms, in the hills, with fields no more than 100 yards across, separated by rows of agave, source of pulque, the ancient beverage which was still the popular beverage of the Mexican peasantry as recently as 1950, now almost gone. After I discovered Mexico in 1991, and started making frequent trips to many parts, I tried to drink pulque every trip. Sometimes it was quite a project to find some. I wonder if I’ll come across any this trip.

Then it is dark. There’s a Wal-Mart. I’m in Xalapa, capital of the State of Veracruz and home of the Universidad Veracruzano, where my daughter has a faculty position. A two-dollar cab ride brings me to her apartment. It’s the first chance I’ve had to visit her in the three years she’s been here.
Posted by Peter Rashkin at 1:07 PM No comments: